Session 1 of our 9 week block

This was Senior Infants first experience of Forest Friday

Second Class had a nine week block of Forest Friday two years ago when they were in Senior Infants.

Lisa was our assistant.

As the children arrive they go to a mat which has a box of natural materials to play and make things with.

Five picnic mats were laid out with a box of materials for each group (these are the table groups in the classroom) as the arrived at Killiney Hill. This gives the children time to gather at different times as some parents have to take siblings to school first.

Each basket has natural materials for the children to explore and to create with.

The baskets will be moved around the groups each week . 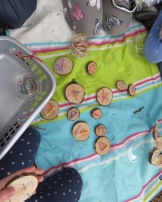 When all the children arrived they were divided into their 3 forest school groups. Ten children in each group will work with the same leader and assistant leader for the 9 sessions.

Map making – Children named significant/interesting markers on route.  Most childern choose areas that made good dens. Here we have the Ivy Den.

The children helped hang red ribbons to mark boundaries. They couldn’t wait to explore. Most of our session time was free-play. I was able to observe each child. Many were interested in climbing. Some were experienced climbers and others were new to it. It was lovely to see children advising others of how to climb. 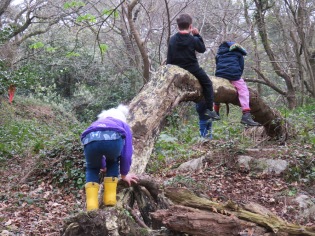 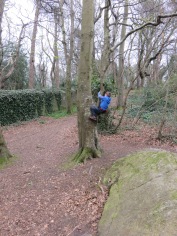 While climbing they were also noticing and pointing out interesting things. 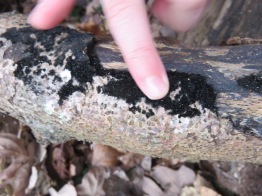 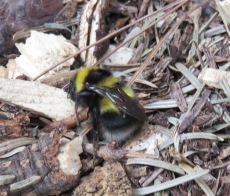 In this environment they were learning so much, and totally child led.

Each week the children will make and taste a wild tea.

The children were encouraged to use all their senses. We felt textures and smelt plants on the way up. I asked the children if they would like to taste some plants.

We collected young bramble leaves for our wild tea tasting. This is a great way to get to know a plant. At the base camp some children discovered that we had lots of bramble leaves and collected more for our tea. At break we settled in by making tea and making a comfortable camp.

After break I told the story of Mama Earth and as I was telling it I made a creature.

Once upon a time Mother Earth was sitting all alone in the plains, dreaming and breathing, dreaming and breathing. There were no animals then, no insects buzzing around. No creepies crawling. No lions roaring (this is a good moment to involve your listeners and ask them to suggest animals to which you can add a verb)… As the sun warmed the earth and the rains watered the land all kinds of plants grew up around Mother Earth. She gazed at them in wonder. One day, Mother Earth pushed her strong hands down into the friendly earth and felt around. She felt something cool, moist and squidgy. When she pulled her hands back out she had some clay in them. She loved the clay and made all kinds of shapes from it. Into the clay she stuck different shaped parts from the plants around her…seeds, buds, branches and twigs. Onto the clay she pressed all kinds of colours and patterns from the plants and rocks.

After she had finished each creation, she put it in the sun to dry. When they were all dry, Mother Earth gave each of them a name and breathed on them. The clay figures came to life and went off to live amongst the plants, walking on the land, flying through blue skies and digging burrows into the earth. And that’s how it came to be that all the animals and people came to live in Africa and some say, deep in the rainforest she is still there, making new creatures every day.

Here is Fox who I created during the story.

The children went off to collect materials to make more creatures to join fox in his world. 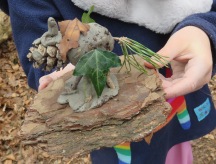 Sometimes the ‘Oops’ in a day makes it.

While I was waking I stood on poor Fox. He was beyond reviving. The children decided he was dead. We must have a funeral someone suggested.

They put out suggestions on how this would happen, what they needed, where Fox has gone now that he was dead. They talked about emotions. One child had lost his grandad recently and he explained how a funeral happened. They asked him how he felt about his grandad.

Someone decided to make a Mrs. Fox. They all had so much empathy for Mrs. Fox and used their creatures to talk to be and be extra friendly and king to her.

So much wonderful learning took place during this session. We finished off sitting in a circle with our eyes closed listening to the wind, the birds and other children in the woods and then shared what we noticed and enjoyed during our first session.

I’m looking forward to working with this group, what a great start.

Mr. Doohan was our assistant.

Wow! Do they need me? They ran the session. Amazing to observe.

The 10 children in my group except for one were new to me. They clearly weren’t new to Forest Friday and being in the woods. Their confidence and knowledge was noticeable.

On the way up to camp I showed them our tin tea brewer and suggested that we make bramble leaf tea this week. They all new exactly which is the bramble plant and that the new leaves were soft and not thorny. 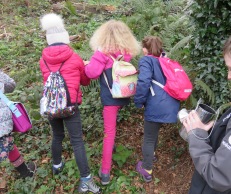 At our camp I asked where we would make the tea and how would we ensure that it was seen and not knocked over. They decided to place the brewer in the centre of our meeting circle and marked it with a circular pattern using sticks and pine cones.

They made a lovely tea ceremony. 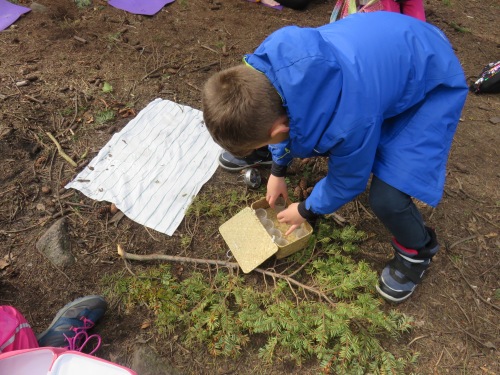 I suspect that many of the things they decided to do was a continuation of two years ago. One group decided to make a shop. There was a lot of sweeping and clearing. Leaves were used as currency. Then a group found a branch on the ground that made a great trampoline. The made rules about the trampoline, how many could go on it at a time and how to take turns.

One girl found a comfortable niche between branches in a tree to draw in.

While the children were playing in different areas they were also noticing. This child having finished her drawing had a close look at her surroundings.

One child called me over to view a bud on a herb robert plant. This was beside the flower but the child noticed the the bud. He pointed out the shape and the hairs on it. Their observation is very deep.

At one point I called everyone together to say I had a story. Would they like like to hear it or carry on. Unanimously they chose to continue what they were doing.

At one stage a child got out a plastic toy creature from his pocket. Mr. Doohan suggested that he leave it in his pocket and make a better one with natural materials. He said if the woodland one wasn’t as good he could use his plastic one. We never saw his plastic one again. I offered him some clay from my bag that I still had left over from the morning session and he went off and created a wonderful creature to have lot of adventures. The idea grew and more and more creatures were created by more and more children. They created stories around them. This is how children play. Ideas expand and rules are made along the way. 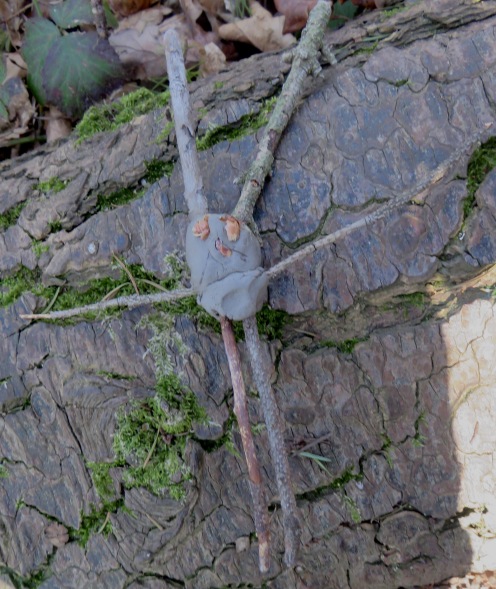 We finished with our sit spots.

What is the adult role here? Yes of course we need to be there to time keep, to suggest if necessary, to gather the children, to be shown interesting things, to observe and respond to our observations.

I loved how Mr. Doohan encouraged the child to use the resources of the forest.